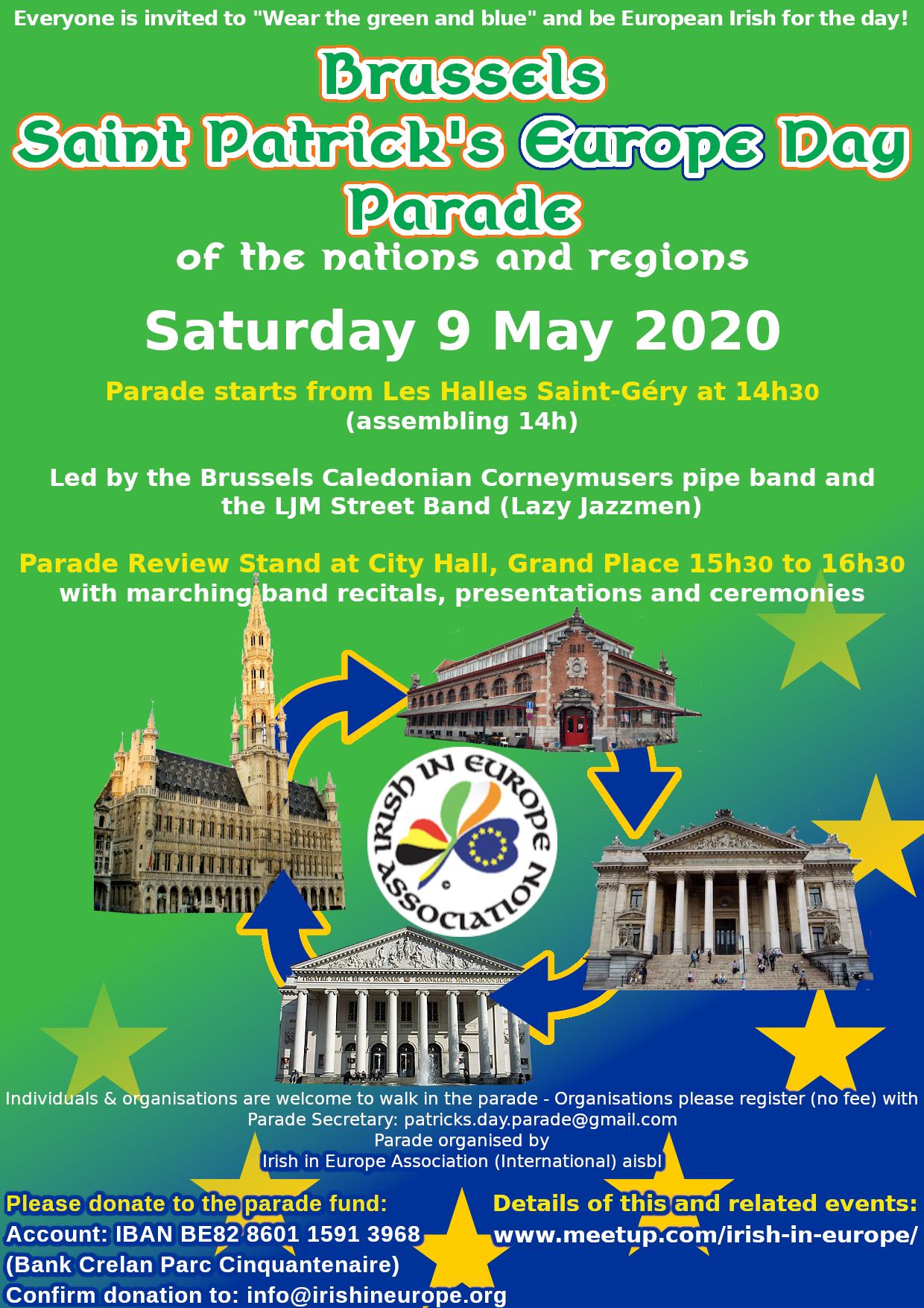 The 17th of March is the national holiday of Ireland and is celebrated in almost every country in the world. Due to the coronavirus, we have rescheduled our Parade that was due to take place on Sunday 15 March to Saturday 9 May (Europe Day)  subject to public health regulations on the day. We have re-titled our parade name to Brussels Saint Patrick’s Europe Day Parade of the Nations & Regions. This is the last practical day for us to hold a rescheduled  parade this year. Our aim now is to have small but symbolic parade  to not only fly the Irish Flag but also the EU Flag in Europe.

Europe Day held on 9 May every year celebrates peace and unity in Europe. The date marks the anniversary of the historical ‘Schuman declaration‘. At a speech in Paris in 1950, Robert Schuman, the then French foreign minister, set out his idea for a new form of political cooperation in Europe, which would make war between Europe’s nations unthinkable.

His vision was to create a European institution that would pool and manage coal and steel production. A treaty creating such a body was signed just under a year later. Schuman’s proposal is considered to be the beginning of what is now the European Union.

On Saturday 9 May 2020, the Irish in Europe Association (International)aisbl organise their 12th annual Brussels Saint Patrick´s Day Parade of the Nations & Regions in the historic City Centre for the third time.  This is now feasible as a result of the decisions of the Brussels City Council to allow more of its historic streets in the city centre to be pedestrianised, safer and more event and visitor friendly.

In recognition of Brussels being the capital of  Belgium, Flanders and the European Union, we aim to have our Parade, as in New York, to be  truly  a ´Melting Pot´ Parade of many cultures that the Irish bring together for one day in the year, invite everyone  to ´´Wear the Green´- the symbolic colour of Ireland ´and be Irish on the day. It is for this reason that our multicultural Parade in Brussels aims to be a Parade of the Nations & Regions. Having the Parade in the City Centre for the third time will allow us to grow our small Parade into the biggest Saint Patrick’s Day Parade on Continental Europe in the years ahead.

Ireland´s relationship with what is now Belgium dates back to 563 AD that marks the beginning of the Irish missionary and scholastic period in Europe which laid the foundations of the university system in Europe as we know it today. The Irish in Europe Year Theme for 2020 is

”Remembering the Irish Contribution to Peace, Democracy & to the Liberation of Europe”

In 2019, we remembered the Irish Diaspora regiment – Irish Guards as part of the Armoured Guards Division that liberated Brussels in September 1944.   This year, we mark the 75th Anniversary of the end of the Second World War and the liberation of Europe.

We have nominated Fermoy in County Cork in Ireland as our partner town for 2020 in recognition of the biggest sacrifice of any Irish born family in Ireland that were killed during the Second World War. They were the Fermoy Sheehan brothers fighting for the Royal Canadian Air Force. The brothers were Harry, Frank and Edward. Two more brothers Michael & Thomas who fought with the Canadian Army and Navy survived.

We intend to also recognise the 100th anniversary of Belgium hosting the Olympics in 1920 and the Irish who participated under different flags.

Our Parade Grand Marshal this year is Hungarian and we will for the next 12 months commemorate the Irish-Hungarian Relationship and the Brussels connection.

Our Parade will again be a historical stroll of discovery that will not only celebrate Irish culture but also help promote the architectural heritage of Brussels. Many people in Belgium and around the world will learn, from the Parade publicity about the Brussels of the past and present, its little-known side-streets and cobbled squares bedecked by its century’s old monuments. Along the Parade route, we will embrace the stories of the past, the local customs and the traditions of the historic streets. As an evolution of these stories, we will weave in the Irish story to create new Irish traditions and ceremonies that will become the Brussels stories of tomorrow and for generations to come.

This year, we again will continue to promote Brussels as a retail centre. More shopping arcades will be illuminated in green over the weekend and more shops and restaurants will have Irish Green Window displays along the route of the Parade.

The completion of street works in one part of Boulevard Anspach allows us now the option subject to funding of extending the Parade of crossing part of Rue Neuve and by Passage du Nord.

We had hoped that the renovation works at the Bourse and Boulevard Anspach street works would be completed.

We have deferred our plans to enter in the Guinness Book of Records to have the only Saint Patrick’s Day Parade outside of Ireland  on an Irish surface  and /or longest Irish surface (Kilkenny Stone owned by Belgian Company) until next year when all the street works are completed to allow the city to get the maximum promotion worldwide  for the  urban works. Because of the uncertainty of the Brexit negotiations until December 2019 and not having the guarantee of having frictionless trade to ship Irish goods via UK to Belgium, it was not feasible to plan our Saint Patrick’s Markets on a big scale this year.  It is better for us to wait until 2021 to have the frictionless trade resolved and streets works completed together with Guinness book record event.  We also believe that these combined activities and completions of street works, would then justify having the retails outlets to open specially and or move the first Sunday opening in March to the Parade Sunday in 2021.

The 2018 Parade was the coldest Parade in its 10-year history. It was minus 4 with the wind-chill factor. Many young children from the dance groups did not participate and also musicians had difficulty in playing their instruments due to frozen fingers.

Hence again for the 2020 Parade, we have decided to submit two route options to allow for weather conditions and other factors affecting the Parade. The short route same as last year. The completion of the street works at Boulevard Adolphe Max allows us to have a longer route  via the little used street rue d’ Argent to pass Place des Martyrs  to cross  Rue Neuve via or to Passage du Nord.

We continue  the following ceremonies:

Parade though  Galeries Royales and Galerie Anspabach and Passage du Nord for the first time..

Review of Parade at Grand Place – Presentation of Shamrock in glass crystal bowl to Bourgmestre ,Playing of the Irish, Belgian and European Union National Anthems,plus the Hungarian in honour of the Parade Grand Marshal and the Canadian in memory of the Sheehan Brothers.

Annual Irish Toast to the health of the Bourgmestre

We will have a special moment of silence for all those who died from the coronavirus.

The Irish in Europe Association (International) aisbl (IEAI) was established in Belgium in 2011 with its European HQ in Brussels. It incorporates the organisational Committee of the Brussels Saint Patrick’s Day Parade of the Nations & Regions that organised the first Parade in 2009 in Parc du Cinquantenaire/Jubelpark.

The main function of the Irish in Europe Association is to support Irish emigrants, connect and engage with the world-wide Irish Diaspora living and working in Europe and to promote Irish culture, inter-state trade, community-building and micro-integration through a network of Chapters in Europe. It also manages the Irish in Europe Cultural Exchange programme between Ireland and Belgium. It has three exhibitions of Brussels on tour in Ireland in association with the Paul Hankar Institute of Brussels: Brussels Like a Tree, Art Nouveau and Art Deco. These exhibitions of Brussels not only assist in the promotion of Brussels as a holiday destination but also help to grow cultural and trade relations between Ireland and Belgium.